[DDOS-Explained] What is DDOS? How is it performed?

The full form of DDoS is Distributed Denial of Service Attack, it is a type of cyber attack which aims to intercept any online server

Hello friends, in today's article we will tell you about DDoS attack, what is DDoS attack and how can it be avoided.

What is a DDoS Attack?

The full form of DDoS is Distributed Denial of Service Attack, it is a type of cyber attack which aims to intercept any online server, application, website or service, so that the user cannot access that website or service. 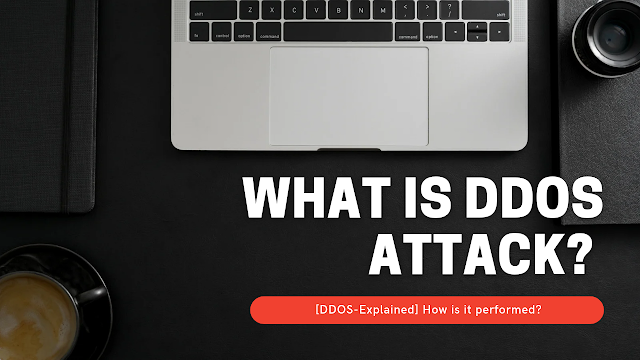 Any online service, website or server has its processing speed and user handling limit and if that limit is continuously exceeded, after a period of time that website or online service becomes slow or crashes, i.e. working stops doing it is.

In a DDoS attack, this point is targeted by the attacker, and the website or service that needs to be downed or crashed is sent huge amounts of traffic from various network sources, so that the target crashes after some time.

Botnet malware is a network of infected computers, which is controlled by an attacking party, and at the time of a DDoS attack, traffic is generated by computers located in the same botnet network, in order to take down the target.

That is, in a DDoS attack the attacker damages his target by filling it with various infected sources, and it is controlled by the attacker from a central point.

How does a DDoS attack work?

Distributed Denial of Service attack is a major form of DDoS attack. Where the target is taken down by DDoS attack by filling the useless traffic through the same network or computer, i.e. the attack is carried out by the same computer or network.

While DDoS attack is a major and devastating attack, it proves to be very difficult to detect and prevent.

This is usually done by botnets, in which attackers install command and control softwares via malware on various user's computers.

And thus a whole large network of bots is created, after which as soon as the attacker gives the command, the botnets are activated and a large number of infected requests are sent to the target.

Which starts consuming the entire bandwidth of that network, resulting in either the service stops responding or crashes after a while.

Although there are many types of DDoS attacks, some of the main ones are as follows:

In this attack, the target is downed due to heavy traffic flooding, for which a large number of UDP and ICMP packets are sent from different sources, so that the server gets loaded and the request processing stops. Given type of attack is measured in bits per second (bps).

In this type of attack, the entire server is not targeted, but the weak links of the online application are targeted, so that the user's access to that application can be blocked. This attack is also called Layer 7 attack. Application layer attack is measured in requests per second (RPS).

How to Avoid DDoS Attacks:

When a website, application or online service is the target of a DDoS attack, it can be very difficult to prevent such an attack if the user has not already taken the necessary steps related to its security.

So in such a situation it becomes very important to do your Security Assessment, so that if any such situation comes, then you can stop it or at least you will suffer loss.

The first and foremost step to avoid this type of attack is to keep your data in some other safe place too, so that you can access it by other means if needed.

From business point of view, you should use network security tools like VPN, Anti Spam, Firewall, Content Filtering, Load Balancing etc. Also all software and patches associated with the web server or platform should be updated, so that more security layers can be used to prevent DDoS attacks simultaneously.

From the point of view of a common user, where you can use online security software like VPN, Secure, Cloudflare to keep a website or online platform secure and every software used should be kept up to date.

You know what is a DDoS attack and what are its types. Along with this, by taking some necessary steps, it is also known how it can be stopped.

Friends, we hope that this information will prove useful to you, and if you still have any question related to this article then fill free to comment below.